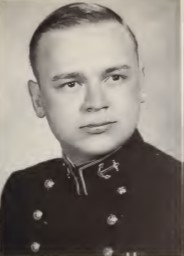 Commander Robert Arthur Baeder, USN (Ret.), 63, died April 9 in his sleep from heart failure at his home in Annapolis. Cmdr. Baeder was born Feb. 18, 1948, into a well-known Missouri family of marina operators.

He received his appointment to the U.S. Naval Academy in 1966 and graduated 21st in his class in 1970 with a B.S. in naval engineering. A brilliant intellect, he earned two master's degrees in naval architecture and marine engineering from the Massachusetts Institute of Technology (MIT), where he also served as an MIT teaching assistant, and several additional educational degrees including a graduate degree in foreign policy and international affairs from the Naval War College, an equivalent graduate degree in nuclear engineering from the Naval Nuclear Power Program and a graduate degree in Education For Ministry from Sewanee, The University of the South.

Cmdr. Baeder enjoyed a distinguished and decorated 25-year naval career. He served on and was qualified for command for many vessels from nuclear submarines to U.S. Navy open ocean yawls. Additionally, he earned his private pilot's license. He retired from the Navy in 1993; his last assignment was to the Naval Academy faculty in the engineering department. A profound influence on the development of many midshipmen's professional knowledge and character, he served as acting chairman/vice chair of both mechanical engineering and naval engineering, while teaching thermodynamics, fluid mechanics, heat transfer, nuclear engineering and ethics.

After retirement, he continued for years to mentor and support applicants to the Academy. From 1993 until his death, he worked for XL Associates of McLean, Virginia, a provider of program management and acquisition and contract support to the Federal government and private sector. A key force in developing the company, Cmdr. Baeder rose to vice president for nuclear operations. For fifteen years, he was the XL point man for support to the Department of Energy's National Nuclear Security Administration (NNSA) for nuclear operations and management. In so doing, he completed more than 165 major NNSA assessments and readiness reviews at such well-known locations as the Savannah River Site, Oak Ridge National Laboratory Y-12 and Nevada Test Site, among others. He was a widely recognized expert in and trainer for operational readiness reviews (ORRs). In July 2001, Cmdr. Baeder was personally commended by the Secretary of Energy for his participation as one of the three member team which developed and implemented the very successful DOE/NNSA Facility Representative (FR) concentrated training course to improve and accelerate the DOE/NNSA FR Training and Qualification. In addition via XL, he consulted with the U.S. Department of Agriculture (USDA) to help improve world food aid programs.

Cmdr. Baeder was a prodigious supporter of the arts in Annapolis. He served as a board member of First Night Annapolis and was a patron and promoter of dance and the visual arts, most especially Paint Annapolis. He was also a man of great faith, a member of St. Margaret's Episcopal Church, Westminster Parish, active in men's Bible studies and Maryland Episcopal Cursillo.

He is survived by three children, Robert Scott Baeder of Ohio, Blaine Baeder of Maryland and Grant Decosta of Florida; former wife, Donna Decosta of Maryland; mother, Harriet Baeder of Ferguson, Missouri; and his much beloved and loving companion, Emile Rodwell and her family of Aiken, South Carolina.

Cmdr. Baeder will be buried in the family plot in Ferguson, MO. A memorial service will be held in honor of his life and memory at St. Margaret's on May 11 at 4 p.m. with a reception to follow at the parish hall, 1601 Pleasant Plains Road, Annapolis, MD 21409.