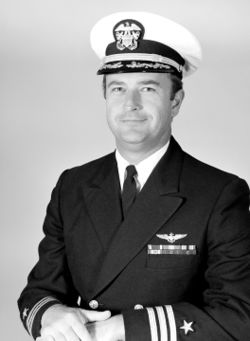 A native of the Lone Star State, Steve’s goal throughout his time at the Naval Academy was to be a Naval carrier pilot. His distinguished aviation career began with his designation as a Naval Aviator in 1972. After an initial tour as an Advanced Training Command Instructor, he transitioned to the A-6 and, in 1974, was selected Intruder Pilot of the Year. His mastery of A-6 tactics and shipboard operations was legendary and led to his selection for Navy Test Pilot School from which he graduated in 1976. He then became the Carrier Suitability and Ordnance Separation Test Pilot for the Naval Test Center, where he conducted high-risk testing of shipboard takeoff techniques using a new “ski jump” design, a forerunner to ramp launches currently in use by the Royal Navy. He also piloted the longest refueled flight in an A-6 series aircraft and earned a Master's in Human Resources Management. Steve continued his career with several deployments in the A-6 and assumed command of VA-145 in 1987. During this very successful tour he became a member of the highly select “Grand Club,” having achieved 1100 carrier landings in 25 different aircraft and 5000 flight hours. He was awarded the Meritorious Service Medal, Navy Commendation Medal and Humanitarian Service Medal.

After his command tour, Steve returned to Pax River as Chief Test Pilot for Strike Aircraft test directorate. Tragically, Steve lost his life on 15 August 1990, while performing high-risk weapons carriage flight testing in an A-6. During a test maneuver which called for rapid control inputs at maximum speed, his aircraft suffered a severe mechanical malfunction from which he was not able to recover.

In a tribute to Steve’s outstanding contribution to Naval aviation and flight test, a major new test facility was named in his honor: The Captain Steven A. Hazelrigg Flight Test Facility. Additionally, the Steven A. Hazelrigg Memorial Award is presented during each Strike test squadron commander’s tour to “those whose qualities of professionalism, leadership and team spirit best commemorate the levels of positive leadership, professional achievement and selfless devotion to duty, which Capt Hazelrigg possessed.”

He is survived by his two daughters Cecily and Stephany, his mother, Germaine Hazelrigg, his father, Rudolph Koch, and a brother Rudolph Koch, an Air Force Master Sergeant.