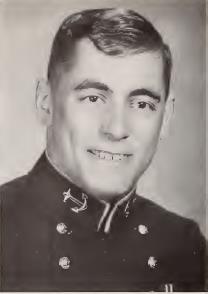 Steven Edgerton Olmstead was born on October 4, 1948 in Ohio, the son of Lawrence and Phyllis (Edgerton) Olmstead. He was appointed to the Naval Academy in 1966 from Palantine Bridge, New York. He was a quiet, steady, loyal and deeply religious classmate throughout his time at the Academy. While living in Annapolis, Steve took up scuba diving and was very active in religious activities. He was also very motivated to become a Marine Officer and headed directly to The Basic School in Quantico, VA immediately following graduation in 1970. Classmate Bob Lewis writes, …” I know he was an awesome Marine. He was true blue to his ideals and his core values were so high. I miss him a lot.”

Steve met his wife, Leslie, at the Solana Beach Presbyterian Church in Southern California. She was part of the church mission committee and worked with outreach programs in Mexico. Steve was the SBPC Mission Elder. They were married June 10, 1980. Steve was medically retired from active duty by the Marines. He died on February 26, 1985, at 36 years of age, due to Amyotrophic Lateral Schlerosis (ALS or Lou Gehrig’s Disease). Steve was laid to rest in Ft. Rosecrans National Cemetery San Diego, CA. He was a resident of Solana Beach at the time of his death.

After Steve’s death, Leslie and their two young sons, Rudd and Woody, focused on their life together. Leslie returned to school to become a video producer and she continues to do this as the Associate Director for Media, Presbyterian Frontier Fellowship. In 1991, she married Jim Santee. Jim and Leslie have been a team ever since, producing documentaries and training nationals in video production. They have lived in Kenya, and Cyprus and have been involved in video ministry in over 30 countries in Africa, Asia, Europe, Latin America, Middle East and North Africa.

Rudyard Swain (Rudd) Olmstead graduated from the Naval Academy in the Class of 2003. Like his father, he went Marine Corps and has served three tours in the Middle East. He is married to Susan and they have one child. Major Rudd Olmstead USMC, is currently stationed at 29 Palms, CA.

Ronald Wood (Woody) Olmstead graduated from the Air Force Academy in the Class of 2006. He is married to Jill Ann, and they have one child. They currently reside in Granger, IN.